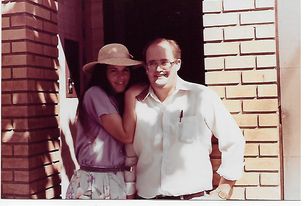 Sue was one of my best friends in the world. We shared our frustrations as correspondents in distant lands (well, 50 miles away or so) at the same newspaper in eastern Washington. We cheered each other on through our advancements and consoled each other when we went toe-to-toe with our bosses, who somehow never seemed to be quite as smart as us.
We got together about every weekend and Sue had this thing she did when she wanted to do something I didn’t want to do — I called it her “basset hound eyes.” (Long before either of us owned bassets). She would flash those eyes at me and I couldn’t resist. Mostly what she wanted to do was clean my apartment, which was only kept up to bachelor standards. And very low ones at that. But one flash of those eyes and I had to assent. And usually get roped into helping.
I’ll miss Sue’s impromptu phone calls, her outrageous and infectious laugh, her always sunny outlook and her ability to tell me hard truths in a way that made them so easy to handle. She was a grand friend.
This picture is of a very, VERY young Sue and Jim from when I gave her a ride to San Francisco and then conducted a one-man tour of northern California.

Jim and Mary Angell will be at the memorial service at Prosser House.